Here's two things to look at...

First is my own Throne of Everblight.  It's been chomping down at Maxx Collectibles for the past few sundays.  She's almost done, then its just finishing the sorceress and pinning her atop this fleshy tower. 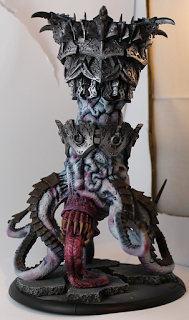 The second was a commission that Jordan had me do at the same time as the Teddies.  Here's a bunch of Bayou Gremlins and Mosquito's.  While the camera is better (yay) my lamps and light box are still ghetto (booo).  This was the first time someone asked me to just touch-up and base already painted mini's.  It was weird fixing someone else's work, but it was bound to happen sooner or later. 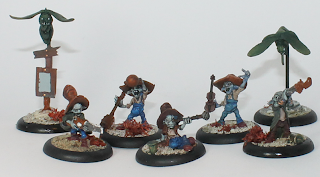 Between commissions I'll be working on Golden Gaunt (Winnipeg's mini GD) entries for the end of May.  I am looking to enter 6 categories: WHFB single and large, 40k single and large, unit and LOTR single.  This is pretty monumentous as I started this blog last year to track work and improvements over the years.

Anywho, thanks for listening, and drop a line if you want some work done :)